The gray clouds covered the sky as a distant storm rumbled. Young Ozul awakened in the dark. With a groan of exhaustion and exasperation, Ozul rose from the solace of his bed, the one place where he felt comfortable. He reached for the light and turned it on. A dim glow then filled the room, radiating weakly, as if the lamp would soon sputter and die of age. Sighing, Ozul stood up and made his way out into the living room. An explosion of thunder made him jump; the violent winds caused the building to creak and groan as if the apartment were urging Ozul with its remaining strength to stay inside. The entire apartment was unlit, the darkness exacerbated by the storm as it consumed the last hints of day and drained the vitality of the sun. Ozul trudged through the dismal, dejected condition of his run-down apartment and made his way into the kitchen. He opened the fridge and found nothing but spoiled meat, stale bits of bread, and old leftovers. His parents were away for the time being, as they frequently were, but had neglected to buy him food this time. It seemed to Ozul that they could never care for him. Grumbling, Ozul turned around and noticed a strange, sweet odor. The rain had carried in a distinct, earthy aroma. The smell was not unpleasant, but rather intriguing. It reminded him of his late grandmother’s garden. What was it? A chrysanthemum? Hyacinths? Wilting roses?

Shaking the thought from his head, Ozul returned to his bedroom to get dressed. With his parents gone, Ozul would have to walk to the market himself to buy food. He bore a heavy, black coat and made his way out again. The storm continued to rage, with the rain pounding against the walls as if it were trying to force its way inside. Ozul peered out of the window, hoping to find that the storm would not seem as distressing as it sounded. And there it was, staring back at him in the darkness of the tempestuous outside. In the reflection of the foggy, stained glass, Ozul saw his scar. It was a jagged streak of wrinkled, pink flesh that ran across his cheek. Looking at it made Ozul’s heart tighten and pound with despair. The scar had been with him since birth, filling him with anguish each day. What Ozul saw in the reflection of the window was not himself, but a ghost. A phantom that haunted him for all of eternity, reminding him that he would never be like the rest.

Other than his parents, no one else knew about it, Ozul had no reason to show his flaw, but had every cause to hide it. Now, though, his deepest secret was threatened. He could no longer hide behind the barriers of his home, and would be forced to expose himself to the public. Would people see? Would they care? Fear trickled into Ozul’s mind, and his heart once again tightened, as pain and anxiety shot throughout his body. Ozul knew that he wasn’t ready, his subconsciousness begged for him to stay put. But he had no other choice. With a deep breath, dragging the hood of his coat on, Ozul opened the apartment door and descended down the darkness of the stairs.

The storm subsided to a calm patter of rain that soaked through the holes of Ozul’s shoes. It was too quiet, however; the streets turned silent and the lightning and thunder had long ceased since his departure, as if it had retreated in fear at his presence. Ozul looked around, praying that no one was near. The roads looked empty and deserted in front of him, and the shops were dark and idle. The lights dully shined and small moths fluttered through the air as if they were choosing which streetlamp they would taunt next. Despite being alone, Ozul still felt uneasy. He buried his face into his coat; it was his only protection from the wild flames of the environment around him. The market had never seemed so far away.

The winds started up again, causing Ozul to pick up his pace. He was now running, sprinting even, when a large gale blew him off guard and knocked him to the ground. Ozul quickly stood up and began walking again, when his heart ran cold and his legs froze in place. His hood was no longer on his head, the scar now exposed to the brisk air. And that was when Ozul saw the black figures, standing in the nighttime. A group of people appeared out of the shadow, staring directly at Ozul, their eyes quickly locking onto the scar. They began whispering, the whispers soon turned into echoes of heartbreak. Ozul did not stay. He ran, the wind still blowing in his face, trying to flee into the darkness, away from the monsters.

More and more people appeared. The more Ozul ran, the more shadows that he saw on the streets. Every corner Ozul turned trapped himself between tall figures, and he could not find his way out. They began to point, their fingers knifing at Ozul’s scar. Some laughed, some murmured, and some yelled. But they all reminded Ozul of the same agonizing truth: the scar was no fantasy, but rather, an everlasting reality. The noises wouldn’t stop. Ozul tried to put his hand up to block the scar, to shield him from his attackers, but it was no use; the scar shone through, it was a vibrant light in the pitch-black outdoors. Tears welled up in Ozul’s eyes despite his efforts to restrain it. He wanted to run back and hide in his bed, under the warmth of his blankets, in the safety of his home. A ringing noise shook Ozul’s mind, growing louder and louder until he could no longer bear it. The world was making a mockery of his terror! He ran and he ran, refusing to look back until his legs gave away, and collapsed in a dark alley. Yet the monsters were still following him! Ozul could do nothing as the figures continued to point at him, their voices piercing through the air. He curled up into a tight ball, wishing he would disappear and leave everything behind. All of it. And he lay there, sobbing and screaming, pleading for the demons to stop. But when he looked up, the streets were empty again. Not a person was in sight, and the dark figures had long vanished. In fact, Ozul had been the only one out that night. 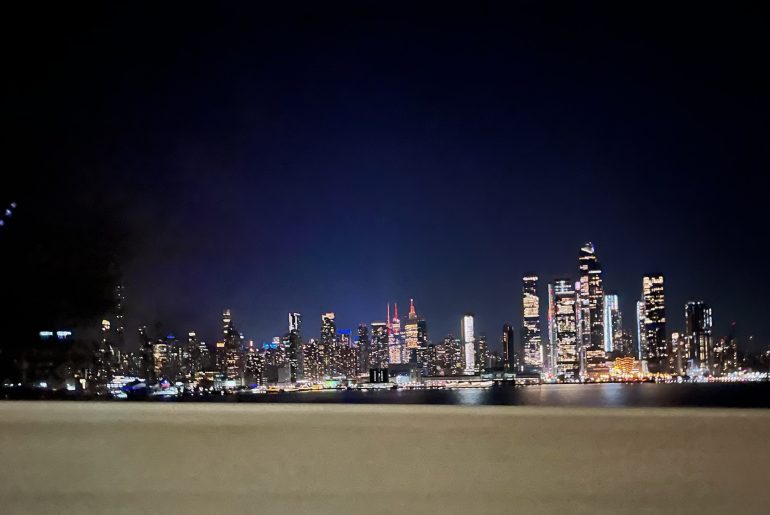 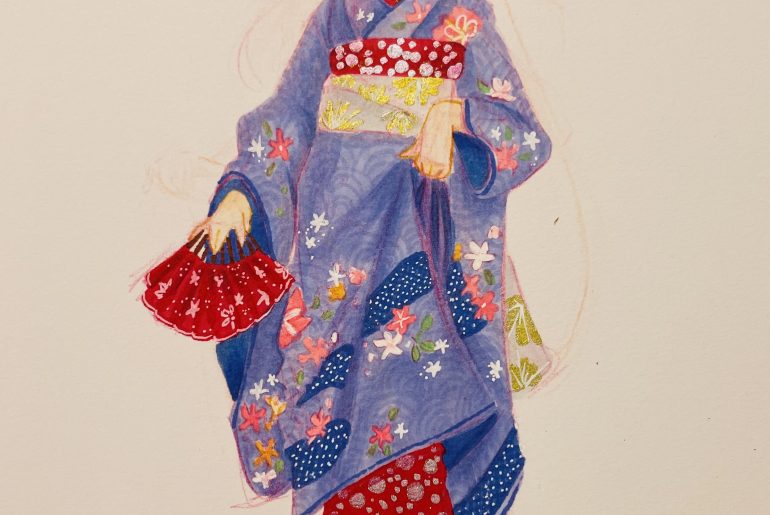 Girl in a Kimono 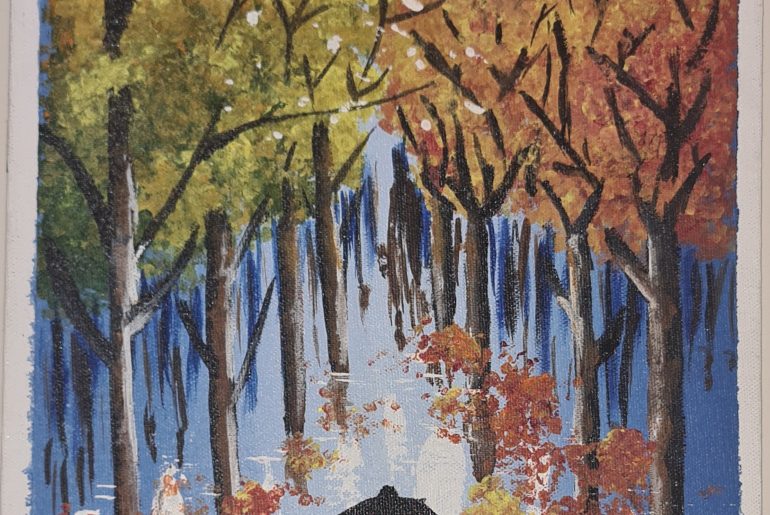